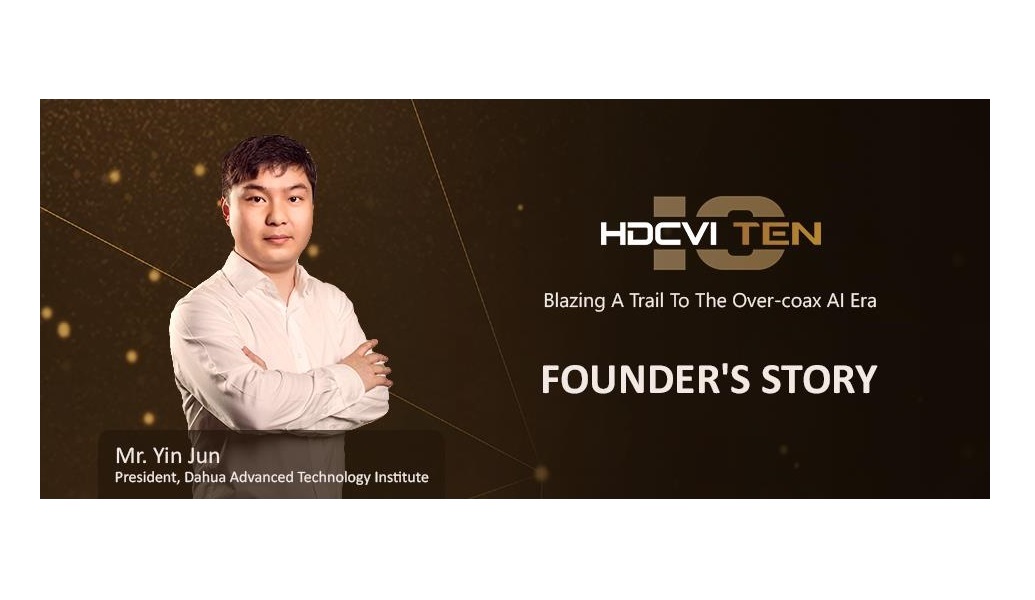 Dahua celebrates this year the 10th anniversary of its independently developed HDCVI technology.

And now with Mr. Yin Jun, the president of Dahua’s Advanced Technology Institute, let’s take a short trip down memory lane and see how the HDCVI technology was first conceptualized and executed.

“Ten years ago – Jun tells – with the comprehensive construction of safe cities around the world, video surveillance, as an important technical means of security, has penetrated into all aspects of urban life. However, video surveillance equipment back then were standard analog technology, which cannot meet the visual monitoring needs of users.

Although IP technology had already started at that time, it wasn’t that popular due to high cost and complex configuration. Front-line construction personnel, like installers and electricians, are more accustomed to using the old Plug & Play analog system. The global market for standard analog is also very large during that time. We thought, if existing coaxial cables cannot be reused, it would be a great waste of resources.

Therefore, we put forward the idea of the HDCVI Technology. Is it possible to develop a new technology that can utilize and upgrade existing coaxial transmission? We want to address the disadvantages of analog systems like narrow bandwidth, inability to transmit HD videos, crosstalk vulnerability of images, lack of audio, control limitations in signal transmission, and transmission distance of only 100 meters. The original idea was very promising, but the actual implementation process was extremely difficult. As a new technology, we have no experience to refer to. It was one challenge after another.

Just building the prototype of HDCVI technology took us almost a year. We had no foundation. We can only build a new technical framework through analog circuits. In order to solve crosstalk issues, we developed brightness and color separation technology. To solve other issues like common cable transmission of video, audio and control signals, we developed advanced modulation technology, and so on. When we finally reached the new transmission protocol, we were hit by yet another issue in transmission distance. But we didn’t give up. After repeated research and tackling key problems, we finally developed a complete and advanced equalization technology. It can automatically identify and compensate the signal loss in the transmission process regardless of cable type and distance. Taking 1080 pixels as an example, our maximum transmission distance can reach up to 800 meters.

In addition to breaking through the technical bottleneck, we have also fully considered how to turn new technologies into affordable products for users. We chose to independently develop our HDCVI chip, and finally achieved success. Since then, the HDCVI technology has successfully attained SD to HD upgrading of the original analog camera wiring network, providing the market with a choice beneficial to customers”.

THE RESPONSE OF THE MARKET WHEN HDCVI TECHNOLOGY WAS RELEASED

“Maybe – Jun adds – now when you mention the release of HDCVI technology, you think of attention and praise. But in fact, at the beginning, we heard more doubts from the industry. Doubts from chip manufacturers and competitors. Many people have mentioned the idea of coaxial HD composite signal transmission before. Several top technical teams in the industry have worked on it. But it has not been successfully realized. That’s why they didn’t believe that Dahua can do it.

Before the 2012 CPSE, our whole team was very nervous about the global debut of the HDCVI technology. On one hand, we need to prove that Dahua has succeeded. On the other hand, we were very excited, because we knew that we have achieved a technological breakthrough; a breakthrough that disrupts the whole security market and has never been anticipated nor recognized.

On the day of the exhibition, many people came to visit. We prepared a roll of 300-meter line and a roll of 500-meter line, and put them on the spot to let people see that CVI can really transmit high-definition images at such long distance. Everyone thought it’s amazing. HDCVI technology has attracted the attention of the whole industry. It gained praises from many technical experts, peers in the industry, and mainstream media. Dahua’s leading technological capability and our desire for innovation make us extremely proud.

Because of the outstanding contribution and high promotion value of the HDCVI technology in high-definition video surveillance, HDcctv Alliance announced that HDCVI will be incorporated into the international standard. It was released in 2013. HDCVI has also become an open international technical specification. This is the affirmation of the market, industry and experts regarding the HDCVI technology”, he ends.