Millennials and Gen Zers are most vulnerable to phishing emails 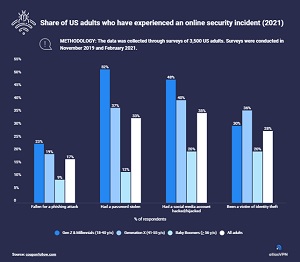 Adults and phishing: there is a popular misconception that older people, who have generally less experience with new technologies, are easier to scam online. Yet, the recent data findings by the Atlas VPN team say that just the opposite is true.

THE SURPRISING FINDINGS OF THE ATLAS VPN TEAM
According to data analyzed by the Atlas VPN team, Millennials and Gen Zers in the United States are more likely to fall for phishing emails than their older counterparts. In total, more than one-fifth (23%) of people from Generation Z and the Millennial generation have been tricked by phishing emails in the past.
When it comes to phishing emails, Gen Z and Millennials are followed by Generation X. Overall, 19% of Gen Xers have been fooled by email phishing scams.
Baby Boomers, on the other hand, are the least likely to fall for phishing attacks. Only 9% of them have done so in the past.
Overall, 17% of the American adult population has been a victim of an email phishing scam or knows someone who has.

NOT ONLY PHISHING
In addition to phishing scams, Gen Zers and Millennials are also most vulnerable to other types of cybersecurity threats. More than half (52%) of people from these generations have had their password stolen or at least know someone whose password has been stolen. The same is true for 37% of Gen Xers and 12% of Baby Boomers.
A total of 48% of adults from Gen Z and Millennial generation have also had a social media account hacked or hijacked, or  know someone to whom this has happened. This number drops to 40% in Generation X and 20% in Baby Boomers.
While younger generations are more tech savvy, they are also very used to doing everything online, from communicating with friends to shopping or conducting financial transactions. This daily use of the internet from a young age makes them less cautious about engaging online or giving out their personal information.
However, when it comes to identity theft crimes, Gen Xers take the lead. Overall, 36% of Generation X adults have had their identity stolen. In the meantime, 30% of Gen Z adults and Millennials have been the victim of identity theft, while only one-fifth (20%) of Baby Boomers can say the same.

AMERICANS FEEL SAFER USING THE NET AT WORK
Having experienced cyberattacks in the past, many Americans are now concerned about their online privacy and data safety. Surprisingly, they feel safer at work than at home when it comes to their online security.
Only 32% of adults in the country fret about their data and security when using the internet at work. Privacy is a concern for 36% of adults. The number of worried Americans nearly doubles when it comes to using the internet at home.
Overall, 64% of American adults said they feel uncomfortable about their online privacy when browsing the internet at home, while 62% worry about their data and security. Of all age groups, Millenials and Gen Z expressed the most concern about how safe they feel when connected to the internet at home, with 77% of them stating they feel uneasy about it.
Concerns about home internet security could stem from the belief that internet service providers (ISPs) may be selling users' data, with the majority (65%) believing their financial data might be shared by their ISP.
However, out of all the environments, most Americans are distressed about their data and privacy when using a public WiFi, and rightfully so, because most public WiFis are unprotected, making it easy for hackers to spy on your online activity and steal your data. Privacy on a public WiFi is a concern for 70% of Americans, and data security is a concern for 69% of Americans.
Some Americans are proactive about their online safety. To minimize privacy and security risks online, more than a third (35%) of Americans use a VPN on either their personal or work devices.

Methodology
The numbers are based on the US Consumer Security, Privacy and VPN Usage Report 2021 by CouponFlow, which surveyed 1,666 US adults in November 2019 and additionally 1,834 US adults in February 2021 (3,500 in total) to find out how they view internet safety and data privacy.

In 2020 and 2021 the security market in Germany continued the expansion it’s living in recent years despite the pandemic. According to industry figures, presented by Messe Essen, in 2021...
9 September 2022 -
Other news from: Topics