Ransomware attacks: half targeted the US in 2021 and 1 in 5 to a European country 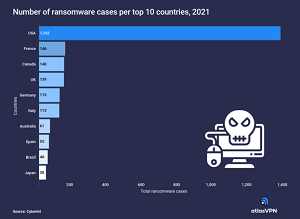 Ransomware in the hands of cybercriminals can become a powerful weapon that could cause your business financial and reputational damage.

According to the recent findings by the Atlas VPN team, in 2021, 48% of ransomware attacks were directed at the United States. Furthermore, industrial and energy, retail, and finance industry businesses were among the most threatened sectors.

Out of 2,845 witnessed ransomware attacks worldwide, cybercriminals launched 1,352 of them at the US last year. Cybercriminals targeted businesses that affected thousands, if not millions of people, such as the cyberattacks on Colonial Pipeline, JBS Foods, and Kaseya.

The United Kingdom and Germany rank fourth and fifth on the list, as organizations there suffered from 139 and 115 ransomware attacks, respectively.

“Ransomware attacks – Vilius Kardelis, Cybersecurity writer at Atlas VPN, says – rose significantly against businesses and government entities in 2021, a trend likely to carry on to 2022. While organizations are scrambling for more cybersecurity resources, educating your employees about the best cyber defense practices is just as important.”

MOST TARGETED INDUSTRIES
Many hacker groups target giant corporations because their disruption causes the most harm.

The industrial and energy sector suffered 599 ransomware attacks globally in 2021. Cybercriminals can disrupt usual gas and electricity flow and cause shortages by attacking energy infrastructure.

Threat actors chose businesses in the retail industry as targets in 545 ransomware attacks last year. Hackers target retailers when they are most vulnerable, such as during the Black Friday or Christmas sale seasons.