“Safe and Secure Solutions for Smarter Cities” by Euralarm 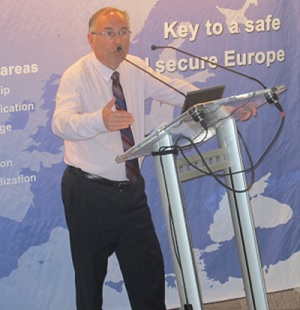 Juan les Pins. “Safe and Secure Solutions for Smarter Cities” was the Conference held by Euralarm on May 13th 2014 in Juan les Pins, France. Smart Cities have become a popular topic for debate, however the focus often addresses only energy, communication and infrastructure issues. This conference explored the many Fire Safety, Security and Services issues that contribute to safe and secure citizens in todays, and tomorrows, growing cities.

Background
The number of citizens living in cities around the world is expected to nearly double over the next few decades, putting increased strain on the infrastructure needed to support these rapidly growing urban areas. Besides energy, health and environmental topics, a focus on life safety is of grave importance as well.

A platform is highly needed to accompany the Smart Cities Initiative that includes life safety requirements, regulations and establishment of a technical infrastructure to achieve the Smart Cities goal settings. Euralarm is the European platform to bridge the European political goals and the possibilities offered by the security and safety industry. Over the past years Euralarm has broadened its scope from pure regulatory to lobbying in Europe and worldwide. This has brought a more public light on Euralarm and offers possibilities to submit solutions in balance with the interest of the European citizens, the European Parliament and the European industry.

Euralarm’s 2014 Conference was aimed to line up the life safety issues related to Smart Cities, to bring together and share technical knowledge, to inform stakeholders about the ongoing process of European standards/regulations and last but not least to interact with professionals who are responsible in the first place for the life safety of its citizens.

Christina Párraga Niebla, Coordinator for the Alert4All project at the German Aerospace Centre, took the opportunity to present the PEARS-Alert4All concept. Alert4All was an EU-FP7 funded project successfully completed in December 2013 proving that a satellite based communication system could be the basis to inform citizens via various media and mobile channels. The Euralarm PEARS concept is perfectly complimentary to the Alert4All approach as it reaches many areas where mobile notification might be inoperative and is capable to inform a broad public in their own language. PEARS would be able to inform people by using the existing Fire Safety, Security and Voice Alarm equipment installed in hundreds of thousands of buildings. Of course it is of major importance to have EU standards especially in the area of communication protocols.

The project has demonstrated that fire and security products not only can, but also should be integrated into public alert systems. The extensive installed base could be easily upgraded to receive alert signals which could be utilized to activate audible and/or visual warnings. More sophisticated systems can convert public alert messages into intelligible voice messages or display the same message on PCs and displays. Integrating existing safety and security systems into a public alert concept could be a cost effective and rapid alternative to reach large parts of the population.

Paul Kubben, Policy Advisor at the Dutch Ministry of Security and Justice, explained the development, implementation and roll out of a complimentary approach in the Netherlands. NL-Alert offers the possibility to send out a warning to mobile phones to alert people in close vicinity of an emergency situation. The nationwide launch (25 safety regions) took place in November 2012. The number of reached citizens in February 2013 was 1.4 million (about 9% of the population) and increased to 3.9 million citizens nine months later (about 25% of the population). About 92% of the population owns at least one mobile phone, and more than 80% of the population is aware of NL-Alert. NL-Alert has been used 30 times since its start; mostly for large fires, but also for heavy weather warnings and bomb detonations.

Second Conference Topic: Fire Safety and Security in Hotels
Dirk Gesenhues, Euralarm General Secretary, gave a brief introduction on the topic of Hotel Fire Safety and Security and the ongoing ‘struggle’ to provide efficient and guest-friendly solutions, especially in large venues. The part of the conference proceeded with three major aspects; consumer needs, incorporation of safety and security in hotels and similar accommodations, and introduction of an EN Directive.

Most important for consumers is the assurance to sleep safely in a hotel, but also to leave it safely and quickly in case of an emergency. With respect to new regulations and standards, two points of interest should be taken into account:
• Demographic changes: large proportion of future population will have a disability, number of elderly increase
• Free movement of EU citizens: people are free to go wherever they want and there is no need to inform authorities.

The facts and figures make clear that beyond any doubt, action is needed. In the UK, while only around 1’000 fire incidents take place yearly in hotels and similar accommodations, only a minor number of hotels (<10%) are inspected on a yearly base, showing a potential for improvement. A similar pattern is seen throughout the whole of Europe.

Based on the European administration of incidents in hotels, it is not possible to determine the true level of hotel fire safety. That’s why ANEC calls for a Pan-European Accident & Injury data system. Another ‘missing link’ is a legal framework for consumer services safety. That’s why ANEC also calls for an EU legislative framework on safety of services. The association also proposes to introduce an EU Directive to guarantee a minimum safety level in hotels.

Dominique Taudin, Chairman Euralarm Fire Section, focused on the importance of the hotel sector as a key driver behind the European economics and reflected the industry viewpoint. About 20 million people in Europe work in the tourism sector. More than 220 thousand establishments and 13 million bed places are available in the European community. Europe needs world-class tourist accommodations to keep its leadership in the sector, which accounts for 4% of its GDP.

The main target for the life safety industry is to develop a policy in which hotel guests experience a guaranteed level of security and safety as an added value and not as a limitation.

A Directive would be the most effective means of ensuring an adequate level of safety in all hotels across the EU. This Directive should emphasize:
• Product/system compliance to EN standards demonstrated by third-party EU-wide approvals
• Qualified companies for installation, commissioning and maintenance complying with relevant European standards (if any, otherwise national standards/CoPs)
• Risk assessment as a significant aspect to maintaining safety and security (requires in some countries third-party expertise)

Third Conference Topic: Smart Safety and Security in Cities
Rolf Sigg, Chairman Euralarm Security Section, stated “As the world changes and technology advances, the demands for additional security and services will increase as the population increases bringing with it additional needs. How can we integrate safety and security concepts into other “smart city” approaches?”

Anton Dörig, Head of Corporate Security at a Swiss cantonal hospital, first keynote speaker about this topic, explained the major importance of procedures and conventions with authorities in charge in case of an incident. From his own experience, he explained what really happens when a situation occurs; for instance a fire in a hospital with 830 beds with 87% utilization and 5’400 employees.

In case of an incident, a huge number of expected and unexpected internal and external stakeholders are claiming attention. By default the first responders need information. The medical staff needs to know what to expect and which evacuation measures are required. Families need to be informed, hospital management needs to know what policy and what kinds of alternatives they have to decide on, local residents will be concerned and the press needs to be informed; just to name the most important aspects. Last but not least, considerations focussed on recovery have to be made.

Jean Felix's, Chairman of the Coordination Group on Smart and Sustainable Cities and Communities, conference message was: “The value of standardization and certification in planning and managing Smart Cities”. He presented different regulations pending to develop Smart Cities.

CEN CENELEC ETSI proposes a generic approach:
• To consider jointly “smart” and “sustainable”.
• To consider smart and sustainability purposes as being defined in the future ISO TC 37101.
• Not to promote rating or certification systems.
• To consider communities instead of cities.

And besides that, a context-setting framework model for investigation gaps and needs in standardization is under construction.

Large scale solutions like Smart Cities are only possible if all stakeholders are prepared to work together. All stakeholders must be aware of the various different approaches:
• Domains
• Objectives
• Systems
• Infrastructures
• Shareholders and interested parties
• Scale

Closing words by Marc Chabaud (Euralarm President)
“As we learned today, cities- preferably called communities will become bigger. Where people are living and working together, the need for security and safety solutions are without any doubt necessary. Euralarm as the main representative of the European Life Safety and Security industry will take its responsibility to develop, propose and promote frameworks by which the industry is capable of creating smart solutions for smart cities within economical borders. Therefore continuous improvement of our influence in the European politics in Brussels is an important topic for Euralarm as a whole.”

The Euralarm President continued: “As I already declared during our General Assembly it is of major importance to create an equal playing field for life safety and security in all European countries and to accept third-party approved trade rules.  An equal playing field offers thepossibility to develop and maintain Smart Cities throughout Europe with equal functionality, comparable quality and foremost a safer Europe for its citizens.”