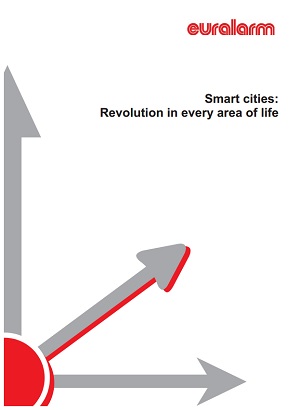 The white paper ‘Smart cities: Revolution in every area of life’ builds upon the current debate on the management of a city’s assets and community services via new net-based technologies, a new paradigm in urban development referred to as ‘smart city’. As a growing global population is rapidly driving cities to their limits, smart cities are seen as the answer to the most pressing questions in modern urbanism.

Issues of shortage and capacity limitations facing cities’ ever growing population apply for traffic or energy supply, but are also relevant to security. The white paper outlines for example the existing correlation between the size of a city and its crime rate and densely populated areas’ vulnerability to terrorist attacks or natural disasters. Considering the magnitude of those potential threats the discussion is, beyond security, about resilience.

As ‘smarter’ cities are increasingly digitalising services such as the organisation of transportation networks and other critical infrastructures, protecting this virtual backbone is key to the future development of cities. An urban community can only function properly if normal life can resume as quickly as possible after an incident, claims the paper. It is easy to make the case to see safety and security as foundation of smart cities.
Central to the discussion on smart cities are various indices built to evaluate how ‘smart’ a city is. Those indices are not only widely divergent but mostly ignore the problematics of security, safety and resilience. They rely on different sets of key performance indicators which are only recently being aligned and defined on the basis of robust standards. A work in which Euralarm Members are heavily involved.

The International Standards Organisation (ISO) has defined in ISO standard 37120 a total of 100 indicators for measuring city services and quality of life. Eleven of them revolve around safety and security. Currently the standard is under revision and more safety and security related KPI shall be introduced. This makes ISO 37120 the only standard with KPIs appropriate for measuring the degree of security and safety in cities on a comparative basis. The University of Toronto and World Council on City Data used the standard to offer the possibility to compare on a non-competitive basis smart cities’ performance and to benchmark against each other.

The fact that ISO 37120 includes diverse safety and security indicators is no accident. Safety and security systems specialists from Euralarm members have actively contributed to the development of the standard. Euralarm had previously advocated, in a 2015 white paper and as part of its campaign ‘A Manifesto for a safer and more secure Europe’, for the inclusion by the EU Commission of fire safety and security aspects as part of its future work on smart cities, including research projects funded under Horizon 2020. Although this is not yet a reality, ‘smart-secure cities’ have now been accepted by a broader community, as illustrated by the ISO 37120 standard.