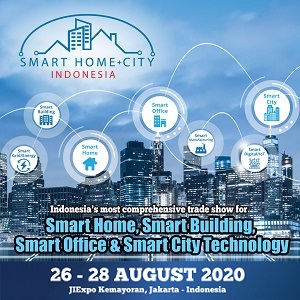 Smart Home + City Indonesia 2020 will take place from the 26th till the 28th August at the JIExpo Kemayoran in Jakarta.

The launch of the government program “Making Indonesia 4.0” which is applied to all industries, makes IoT as a link between all equipment that uses the internet as its base.

IoT market prospects for Indonesia are:
– IDR 444 trillion in 2022 and
– grew to IDR 1,620 trillions in 2025
which shows the extraordinary economic growth that is in line with the development of IoT.

Indonesia, which is the largest archipelago country in the world with a population of more than 260 million inhabitants, has the largest economy in Southeast Asia. This makes Indonesia a promising country for the development of IoT (Internet of Things) and digitalization. McKinsey even predicted that Indonesia would become the 7th largest economy in the world along with improving productivity in each sector and also the urbanization that will occur in 2030.

The Internet of Things (IoT) is starting to grow significantly, as business professionals, consumers and governments recognize the benefits of connecting software to the internet. As part of the national economic masterplan, Indonesia seeks to become the largest digital economy in ASEAN. By 2019, 20% of local and regional governments in Indonesia will use the Internet of Things (IoT) to turn infrastructure such as roads, street lights and traffic lights into assets rather than liabilities, IDC predicts.

In addition to IoT, development with the concept of smart and green buildings in Indonesia is expected to reach 20-25% of the overall market in 2025. Building Energy Management Systems (BEMS) driven by cloud computing and the Internet of Things (IoT) offer energy comfort and performance which is optimized in new and existing buildings

Utilizing the sun as a renewable energy is one program that supports the implementation of smart and green cities in the Smartcity concept. Abundant solar energy can be stored by using solar panels to capture its rays and stored in batteries which will be used as an energy source for lighting.

With the market potential for Rooftop Solar PV installations reaching more than 116 GWp, the Government of Indonesia is targeting as much as 23% of renewable energy in the country's energy mix by 2025.

Amendments to the Regulation of the Minister of Energy and Mineral Resources 49/2018 concerning the ease of installation of Solar Power Plants for the household, commercial and industrial sectors will encourage high demand to install Rooftoop Solar Power. It is estimated that demand for Solar Roof Installation for Households can reach 655 MW and 300 MW for Industrial / Commercial by 2020. And the estimated total installation of Solar Roof PV will reach 12-15 GW in the next 10 years.