Cybercrime: Most Damaging Services cost less than $500 on the Dark Web 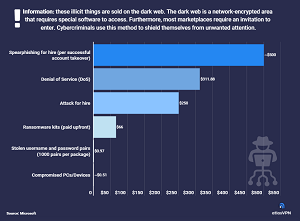 Most damaging Cybercrime attacks, like ransomware kits and sophisticated targeted attacks, cost anywhere between $66 and $500 on the dark Web, according to data presented by the Atlas VPN research team.

“Cybercrime – they underline from Atlas – has been dominating the headlines of many technology-related websites for at least the last two years. There is a valid reason for the attention, criminals are increasingly more successful in their cyber-attack attempts, sometimes profiting thousands of dollars from a single intrusion. Yet, do we know anything about the costs behind these attacks? Here, we will analyze how many resources hackers need to launch an attack on enterprises and users. Analysts from Microsoft provided the costs of these tools in their Digital Defense Report, released in October 2021”.

Denial of service (DoS) attacks are among the most common types of attacks in the cybercrime world. Hackers charge around $311 to send a barrage of DoS attacks for a month. These attacks are meant to overflood a specific network with traffic to the extent that it becomes unavailable for its users.

SERVICES SOLD BETWEEN HACKERS
“Innovative hacking technologies have been mostly developed by large hacker groups. Smaller groups or individual hackers do not have enough resources to develop such software.

As a result, there is a demand for specific services, which are being sold on the dark web. Many organized crime groups (OCGs) interact with one another on the dark web in private forums. To get in, you'll need a good reputation and a referral from someone who knows the ropes. OCGs can collaborate, exchange their latest technology, and sell their services in these forums”, they end from Atlas VPN.

In 2020 and 2021 the security market in Germany continued the expansion it’s living in recent years despite the pandemic. According to industry figures, presented by Messe Essen, in 2021...
9 September 2022 -
Other news from: Topics