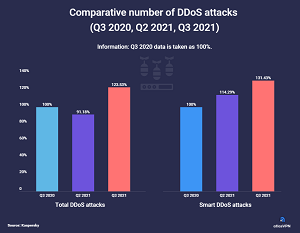 “Characteristically – they say from VPN – the third quarter of the year is relatively calm in terms of DDoS (denial-of-service) attacks. This year, however, the pattern is completely different, as the volume of attacks reached record heights. The data for the report is provided by a cybersecurity and anti-virus provider Kaspersky. The company gathered DDoS attack data from its users to provide a clear view of the current threat landscape. The chart reveals that the total volume of DDoS attacks grew by 23.64% in Q3 2021 compared to Q3 2020. Similarly, smart attacks climbed by 14.29% in Q2 2021 and by 31.43% in Q3 2021.

The number of daily DDoS attacks was especially high in Q3, surging to record heights since Q1 2015. In July, the average daily count of DDoS attacks had surpassed 1,000. Moreover, Kaspersky recorded an all-time high of 8,825 attacks on August 18th.

The jumps are especially noteworthy because DDoS botnet activity is increasing together with the cryptocurrency market. These two areas have been competing for computing power because many botnets can be used for both DDoS as well as crypto mining.

High cryptocurrency prices typically drew capacity away from denial-of-service attacks, but in Q3 2021, we see a different pattern.

DDoS services are in high demand, and a prolonged supply shortfall has likely resulted in a price surge, making it profitable for botnet operators to recommence attacks. As a result, the DDoS market appears to be returning to its late-2019 growth rate”, they end.