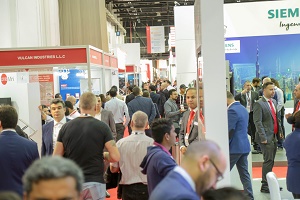 The Middle East’s US$1.9 billion fire safety systems and equipment market will see solid growth over the next six years, with new government regulations around life safety and fire protection along with large scale infrastructure investment among the key market drivers.

A November 2018 report by analysts 6Wresearch estimates the Middle East market for firefighting systems, fire detection & alarm systems, and emergency exit & lighting, will be worth US$3 billion by 2024, growing at a compound annual growth rate of nearly eight percent.

The report stated the regional market witnessed a slight decline during 2014-2016, however from 2017 demand has picked up, aided by recovering oil prices and government economic diversification initiatives aimed at reviving the construction sector.

Additionally, revised fire and life safety codes, such as those rolled out by the UAE Civil Defence in 2016, has helped growth in passive fire-rated products in new buildings and infrastructure, while adding further impetus to the retrofitting segment, where newer systems in line with current regulations are replacing older systems.

6Wresearch’s report was published ahead of the Intersec exhibition, the world’s leading trade fair for security, safety, and fire protection, taking place from 20-22 January 2019 at the Dubai International Convention and Exhibition Centre.

Fire & Rescue is the second largest of seven show sections at the annual three-day event, where more than 1,300 exhibitors from 59 countries are set to take part in the show’s 21st edition early next year.
More than 350 of those will be in the Fire & Rescue section, including the biggest names in the global fire and life safety business such as UAE-based powerhouses NAFFCO and Concorde Corodex Group, Honeywell from the USA, Japanese-headquartered Hochiki, Drager from Germany, and Turkish fire truck manufacturer, Volkan.

Eaton Corporation is another headline exhibitor in the Fire & Rescue section, and is one of many companies at Intersec 2019 positive about the current and future fire safety trends in the regional market.

Andreas Rex, Intersec’s show director, says: “The commercial and hospitality sectors are other key verticals driving demand for fire safety systems and equipment. The big growth, particularly in the UAE will come over the next two years as delivery of the Dubai Expo 2020 looms, while throughout the Gulf region, large scale infrastructure investment will steer the market toward solid growth. Intersec, situated at the heart of it all in Dubai, presents the ideal opportunity to access these markets and beyond, where thousands of engineers, system integrators, contractors, industry professionals and decision makers will seek solutions for their various projects.”